Archibald Sim Montgomrey (1843-1922) He was born in 1843 in Brentford, the son of a wholesale timber merchant. He is described as a timber merchant in most of the census returns, and one also indicates that he was a JP (as does his entry in the Cotteswold Naturalists' Club's proceedings).

He and the family moved around the country between 1840 - 1890 (Ealing, Hillingdon Heath, Heston, Brighton & Isleworth. He married Olivia Maria Coward in 1870. Archibald was left the Brentford premises when his mother died in the early 1900's. Sim was his mother's maiden name. There is a Montgomrey's Wharf in Brentford.

In 1912, his address (as given in the Proceedings of the Club) was Montpellier Grove, Cheltenham.

He was a member of the Cotteswold Naturalists' Field Club, and there are references to him in the Journal of Botany - see H@H message board. He died 12th April, 1922 at Hilperton Rectory, Trowbrdge (where his nephew (?) P C West, was living). Though he is named on several specimen labels at H@H, it is not clear if it is his hand writing or that of HST / or another collector 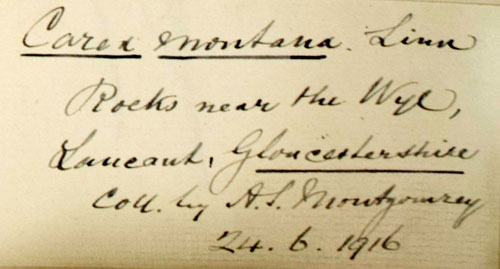 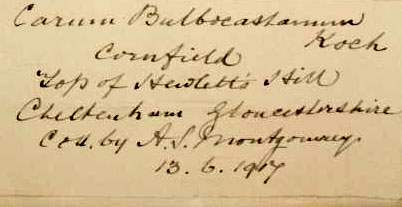 This collector related article is a stub. You can help the herb@home wiki by expanding it.
Retrieved from "http://herbariaunited.org/wiki/Archibald_Sim_Montgomrey"
Categories: Collectors | CollectorStubs | Stubs