There are many sheets at H@H associated with James Ward - a few details follow: 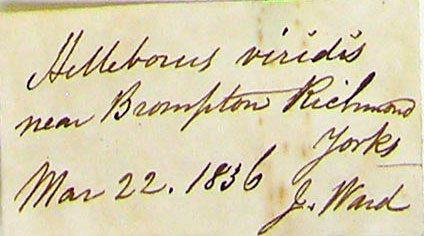 Was born on Christmas Day, 1802 in Wensley. He was the 2nd son of 7; father was Robert Ward, grandfather Robert Ward from Ingerthorpe, nr Ripon. He was educated at a school in Leyburn, some 2 miles from Wensley until the age of 14. He then went to work with his uncles at Richmond – they were chemists and oil merchants. One of the uncles, John Ward founded the Richmond Floristic Society to promote the cultivation of ‘flowers and fruit’. Uncle John was a botanist, at some stage he went to London to train as a medic but did not take to the surgical element. He took charge of his nephew’s studies.

Young James worked long hours 7am to 8 pm, but rose early (4 am) in order to find time for botanising. He also used the occasional day off. By 1824, he was able to compile a list / catalogue of plants growing in N Yorks, especially the plants of the valleys of the Swale, Yore and Tees. This catalogue was referenced by H C Watson, in his New Botanist’s Guide. Ward and Watson corresponded until his death in 1873.

12/6/1836 Fellow of the newly created Bot Society of Edinburgh. 1847 Local secretary to the London Botanical Society.

In 1856, he withdrew from business, and concentrated on his garden. Interested in Saxifrages. In 1863, he traveled extensively in Ireland and in 1864, he went to Switzerland. In 1865, the Richmond and North Riding Naturalists Field Club was founded and he was one of the vice presidents. He established a reference herbarium for them (2000+sp).

By the age of 67, he was greatly troubled with rheumatism and moved ‘south’ in search of a more congenial climate / weather. His last 2/ 3 years were spent at Barton upon Irwell, he died in 1873 and was buried at Chester.

This collector related article is a stub. You can help the herb@home wiki by expanding it.
Retrieved from "http://herbariaunited.org/wiki/James_Ward"
Categories: Collectors | CollectorStubs | Stubs