George Nicholson was born in Sharow, near Ripon (Yorkshire) on 7th December 1847. His father (James) was described in various census returns as a nurseryman and seed manufacturer, and George is recorded as working in the nursery as a young man. He spent some time in France, working at Nurseries in Paris (he was fluent in French and German). In 1875, he married Elizabeth Naylor Bell at Thirsk. She died, aged 28, in 1879. They had a son.

Desmond’s ‘Botanists’ records that he started work at Kew in 1873, and was appointed Curator in 1886 (a post that he held until 1901), when he retired due to ill health. He continued to undertake botanical researches as his health permitted.

The 1881 census records that he was living at Kewfoot Road, 2 Old Deer Park Villas, Richmond and employed as a junior clerk by H.M Office of Works. By 1891, he was living at 3 Royal Gardens, Kew, widowed and with his son (James Bell Nicholson) and sister (housekeeper). In 1901, he was at the same address and his sister still acted as his housekeeper.

He contributed a lengthy article on "The wild flora of Kew Gardens and Pleasure grounds" in the Journal of Botany (1875). However, his main work was his "Illustrated Dictionary of Gardening", which became a standard work (a french edition was also produced). He was also an expert on Oaks and Maples.

In 1898, he was elected a Fellow of the Linnean Society and was one of the first to be awarded the Victoria Medal of Honour (for his contribution to horticulture in 1897). A large collection of British plants that he accumulated was bequeathed to Professor Trail and, together with Trail's sheets etc, these formed the foundations of the British collection at Aberdeen. Nicholson also helped in the planning of the Cruickshank Botanic Garden, adjacent to the Herbarium.

The herbarium at the University of Aberdeen. 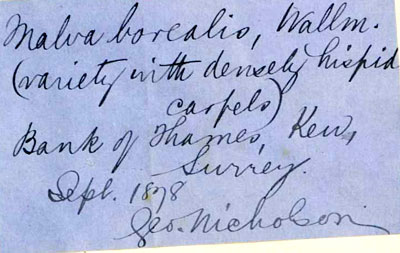 This collector related article is a stub. You can help the herb@home wiki by expanding it.
Retrieved from "http://herbariaunited.org/wiki/George_Nicholson"
Categories: Collectors | CollectorStubs | Stubs