Arthur Bennett was an enthusiastic botanist. Inspection of various herbaria@home sheets indicates that apart from his collecting activities, he cultivated various root stocks, cuttings and seeds in his Croydon garden from a wide variety of localities (as the label below indicates). He even grew pondweeds there, specifically Potamogeton x lanceolatus. 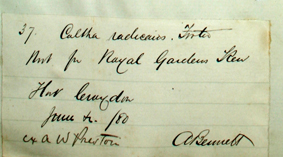 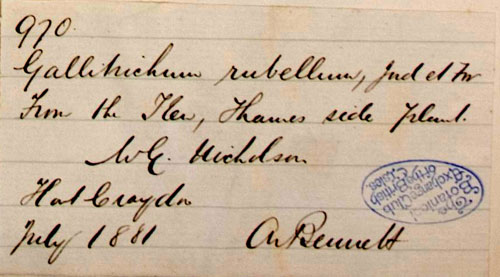 The following quote is from Preston’s article “Potamogeton x lanceolatus Sm. in the British Isles” Watsonia, (1988) 17,309-317 : “Bennett cultivated the Burwell plant in a small pond in his Croydon garden - it "flourished remarkably" and he was able to distribute 200 specimens of cultivated material (Bennett 1925). The plate in Fryer & Bennett (1915) is based upon Cambridgeshire material.”

His work on pond weeds (Potamogetons of the British Isles) is his particular memorial; he worked on this text with Alfred Fryer (see H@H database). Bennett's Pondweed is named after him. It was first discovered in the Forth & Clyde Canal at Grangemouth in 1890, where it grew in ponds used for wood storage. The plant persisted until 1937 when the ponds were drained. In recent years, it has only been found in the Glasgow Branch of the Forth & Clyde Canal. It has been described as a ‘delicate’ plant, growing to five feet or more in length, for further information see SHOPPING TROLLEYS HAVE THEIR USES! on page 3 of the Southampton Canal Society Newsletter..

Bennett was born in Croydon in June 1843. In the 1871 census, he is described as a master plumber (employing 5 men and a boy). He lived in the High Street (107), with his first wife (Priscilla) and three daughters; also living there was his brother (a carpenter), a servant and a (monthly) nurse. By 1881, the census notes that he employed 10 men and 3 boys. This would seem to suggest that he was a successful businessman. However, in his book “The Botanists” D E Allen notes that he was helped financially (at one point) by G C Druce (see p. 101) – details of Druce are also to be found in the H@H database. Bennett's second wife, Jessie joined in some of his botanical expeditions (sheets bearing both of their names can be found in the H@H collections). After his death, it would seem that she was awarded a Civil List pension - for his contribution to botanical science (see "Civil List Pensions" Nature 147, 509-509 (26 April 1941)). [CLL]