Married, his wife Fanny took an interest in his botanical work, especially on the summer holidays in Scotland (sometimes with F J Hanbury & W Shoolbred). Dunn's Flora of Surrey acknowledges the contribution / help that Marshall gave.

In 1904, he moved to West Monkton where he stayed until 1918. The grounds of the rectory included a wood, pond, stream and a rock garden. He used parts of this garden as experimental plots for growing on cuttings / root stock. He had a particular interest in Saxifrages and the genus Betula. He was a keen member of the Somerset Archaeological and Natural History Society (see jpg below).

He and his wife offered hospitality to fellow botanists; and many notable botanists joined with their various botanical excursions - such as Bickham, Beeby, the Linton brothers, Moyle Rogers and Salmon.

He bought a place at Chepstow, which was intended for his retirement, when he hoped to work on the Flora of Gloucestershire with the Rev Riddelswell, but this was not to be. In 1918, his health was compromised and he was greatly affected by the death of his brother and then his wife, and he died shortly thereafter.

Info taken from the obituary in the Journal of Botany 1920, written by James Britten. 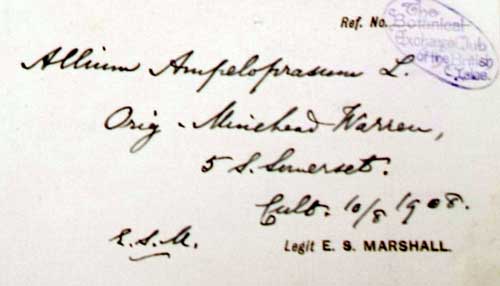 This collector related article is a stub. You can help the herb@home wiki by expanding it.
Retrieved from "http://herbariaunited.org/wiki/Edward_Shearburn_Marshall"
Categories: Collectors | CollectorStubs | Stubs