Anyone who has spent any time on the H@H site will be familiar with specimens bearing Painter’s cursive, some might say flamboyant handwriting; often elegant, sometimes indecipherable! 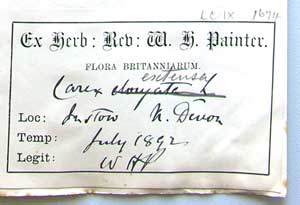 Painter did much useful work on the flora of Derbyshire, publishing a long paper in 1881, with supplementary notes in 1889. Together these formed the basis of “Contributions to the Flora of Derbyshire” (which was somewhat critically reviewed by J E Bagnall (see Journal of Botany, 1899, 318). Painter published a supplement to this in ‘The Naturalist’, which indicated that he was fully aware of its limitations.

Whilst staying in Falmouth (in the Spring of 1898), Painter took up the study of Mosses. From that time on, mosses were the focus of his botanical interests. He published papers on the mosses of Derbyshire, Brecon, Falmouth and Cardiganshire in the early 1900’s. Painter was a keen collector and a member of the Botanical Exchange Club (again evidenced by many of the sheets in the H@H database). His herbarium, together with his geological specimens, was presented to University College, Aberystwyth before he left Stirchley.

Painter was born in Aston, Birmingham in 1835. Prior to entering the Ministry, he was a bank clerk (according to the 1851 census; and his father was a haberdasher). In 1861, the census reveals him to be a lay preaching assistant, staying in Chelsea as a lodger (with the North family).

He underwent training at the Islington Missionary College, with a view to undertaking missionary work for the Church Mission Society. However, circumstances were such that he undertook a curacy at Barbon in Westmoreland. It was here that he met (Rev) Robert Wood (also listed in the H@H database, who introduced him to botanical studies. In 1865, he became Curate at High Wycombe – where he met with another botanical mentor, James Britten (again listed in the H@H database). They enjoyed many a botanical ramble. The 1881 census records him living in Bedminster, Somerset (again as a curate, with his wife – Jane who he married in 1871). In 1891, he was a curate at Biddulph in Staffordshire. Then in 1894, he was appointed Rector of Stirchley in Shropshire. He remained in Stirchley until 1909, when failing health forced a move to Shrewsbury. When he died in 1910, he was buried in Stirchley. On his death, the English Churchman (October 20th 1910) said “…the Church of England has lost a faithful and devoted minister who was ever jealous for the maintenance of its Protestant principles”.

Link to Flora of Derbyshire